BISMARCK – The Bismarck Larks are releasing new “fireworks or gunshots” guidance ahead of their busy baseball season. The guidance will provide a means for citizens to discern between the baseball team’s evening fireworks displays and gunshots in the Bismarck Mandan area.

“We receive at least 40-50 calls each night from concerned citizens wondering if we’re shooting celebratory fireworks,” says Larks Pyrotechnic Director Sparky Gunner. “It’s unfortunate when the answer is ‘no’, because it probably means the sound they heard was the sound of someone getting shot.”

The new “fireworks or gunshots” guidance includes a questionnaire for Bismarck-Mandan residents to help them quickly identify if the Larks are displaying fireworks. Fans who attend the Lark’s season opener will receive a complimentary “fireworks or gunshots” map that lists new guidelines along with phone numbers for the Mandan and Bismarck police departments.

“If you live in Mandan and hear a loud bang, its definitely gunshots,” says Gunner. “If you live anywhere east of Seventh Avenue, most likely again, the sound you’re hearing is gunfire. For fans living south of Bismarck Expressway and west of Seventh Avenue, it’ll be trickier to discern between the two as there’s an equal chance the sound may be both fireworks and gunshots. In those instances fans are encouraged to check in with the Bismarck’s People Reporting the News Facebook page. As we’ve mentioned to fans in previous seasons, we do not condone celebratory gunfire should the Larks win a game.” 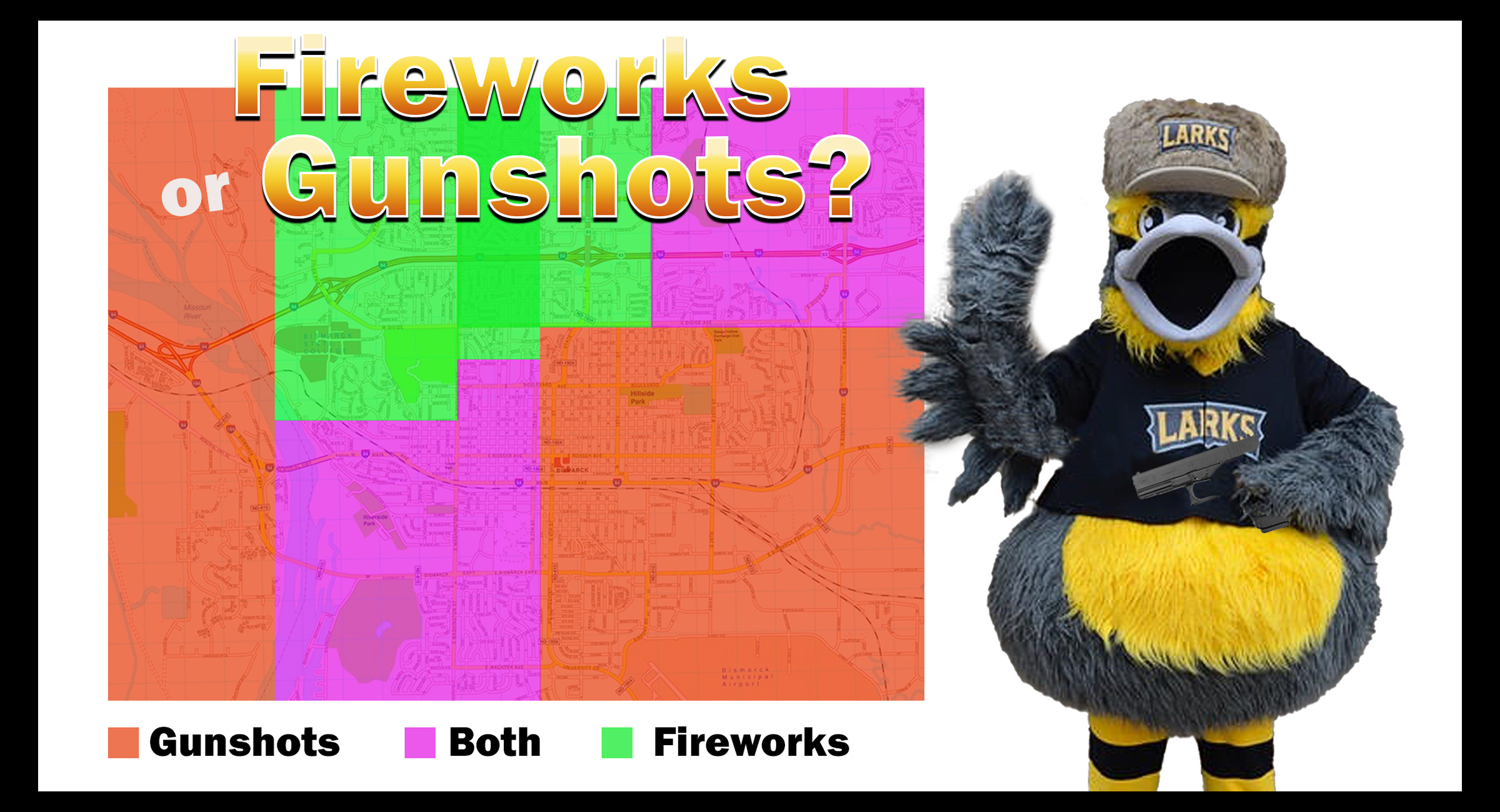 The Larks say they’re planning on rolling out a widespread public awareness campaign to help get their “fireworks or gunshots” message out.

“Both Clark the Lark and Merriweather plan to drive through a few neighborhoods this summer firing a random weapon into the air while the other shoots off some bottle rockets. The ninth caller who can correctly discern between the gunshots and fireworks will win box of shotgun shells and a $75 TNT Fireworks gift card,” says Gunner.

Gunner says a telltale sign a citizen is hearing gunshots rather than fireworks is a short succession of bangs followed by the sound of police sirens.

”By listening to the sound and identifying your location on our map, you’ll be able to know if you’re getting shot at or hearing fans cheer on the larks.”

The Bismarck Police Department say the new guidelines should be helpful for citizens and help curb its call volume during the summer months.

“Citizens can now sleep soundly knowing if the noises they hear are gunshots or a Larks game,” said a Bismarck Police Department Spokesman. “All thanks to the great efforts by the Bismarck Larks.”

The Flickertail Times is a satirical news site digging up all things North Dakotan. Feedback? We’d love to hear it. Send us your comments to editor@flickertailtimes.com

BISMARCK — Members of the Bismarck School Board dug their own graves today in yet another sign of submission to COVID-19. Members of the school board said the...

Bismarck Bubble Observed For the First Time With Naked Eye

BISMARCK — In a follow-up to our original story published in 2019, this week the Bismarck Bubble was observed for the first time with the naked eye over...

Cookin' Up Conversations: Ice-Breaker Recipes For Your Thanksgiving Reunion