The snacks were beatified earlier this week at the Vatican, a critical step that allows the snacks to be referred to as “blessed” after the famous pretzels were credited for performing a miracle.

According to Vatican insiders, the Pope was enjoying a bowl of Dot’s Pretzels in his residence when the flavor suddenly changed from original to southwest.

“Just as Christ changed water to wine, the original zesty flavor of the pretzels transformed into a spicy alternative in the blink of an eye. A true miracle from God,” said Pope Francis. “It was an awakening of the mind, spirit, and tongue.”

Rumors have swirled in recent weeks that Pope Francis has been secretly battling the coronavirus. However, after a diet of Dot’s Pretzels and holy water, the Pope has been spotted performing his daily duties in perfect health.

“It’s undeniable that Dot’s Pretzels have a healing quality about them,” says the Vatican’s Vicar of Velveeta. “So much so, Pope Francis is recommending all parishes to substitute holy water for Dot’s Seasoning on those who are baptized in the name of the Father.”

The Vatican says it may allow Catholics to place Dot’s Seasoning on their foreheads as a substitute for ash on Ash Wednesday.

Dot’s Pretzels are scheduled to be canonized in a holy snackrament in the coming weeks. The Episcopal Diocese of North Dakota, joined by state and local leaders, are expected to attend the event in Rome.

“Both myself and Kris were overjoyed at the news that Dot’s Pretzels will become the one and only patron saint of snacks and the first saint with North Dakota origins,” said Senator Kevin Cramer. “The undeniable zing of Dot’s Pretzels has united families for years and is enjoyed worldwide by millions of devoted fans. I look forward to attending the holy snackrament in Rome.”

The North Dakota Roughrider Hall of Fame says it expects to induct Dot’s Pretzels into the hall of fame gallery following the snack’s canonization while the University of Mary says it will provide all students, faculty, and staff with a week-long “snacking sabbatical”. 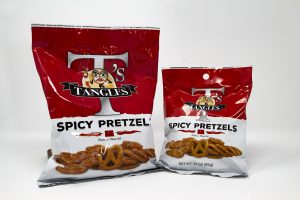 The Vatican says while the energy surrounding Dot’s canonization is exciting, they are warning parishioners to not be deceived by Dot’s lookalikes.

“The bible teaches us that Satan uses many forms of disguise to lead followers astray. In the book of Genesis, he took the form of a snake. Today, the devil is very much in the form of T’s Tangles, a snack that originates from North Dakota’s own sin city – Minot. T’s Tangles may be tempting but the devilish snacks branding peppers from hell on its packaging are anything but saint-like. These treats, known as the snacks of Satan, will tangle wayward souls into a downward spiral sinful pleasure.”

The Flickertail Times is a satrical news site featuring all things North Dakotan. Feedback? We’d love to hear it. Send us your comments to editor@flickertailtimes.com