Bismarck Bubble Observed For the First Time With Naked Eye

"Nature is healing and we were wrong," says National Weather Service.

BISMARCK — In a follow-up to our original story published in 2019, this week the Bismarck Bubble was observed for the first time with the naked eye over the skies of the North Dakota Capitol, prompting the National Weather Service to issue a rare apology. 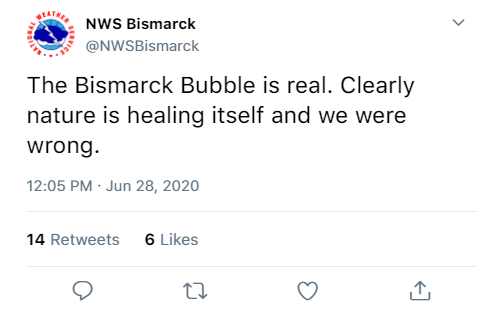 “The Bismarck Bubble is real. Clearly, nature is healing and we were wrong,” said the National Weather Service via Twitter. “We attribute the sudden observation of the bubble to COVID-19. Folks are driving less and less, and with our coal plants shutting down, nature is starting to heal. The evidence the bubble exists is undeniable. It can be seen above the skies, reaching far into the troposphere. As if we didn’t need more evidence, it has shielded us from much-needed rain, resulting in dangerously dry conditions.”

While residents of Bismarck have long expressed belief in the Bismarck Bubble, many local meteorologists still deny the existence of the natural phenomenon.

“It doesn’t exist. The bubble is nothing more than fake news,” says KFYR Chief Meteorologist Kevin Lawerence, who’s forecast accuracy in 2020 is worse than the .168 batting average record set by Chris Davis of the Baltimore Orioles in 2018.

Recently, Meteorologist Amber Wheeler of KX News hosted a town-hall to dispel the myth of the Bismarck Bubble. Wheeler declined to comment upon hearing the news the bubble could be seen for the first time in history.

The Bismarck Bubble has been observed for decades. The disturbance has been linked to the sudden dissipation of severe weather at the mature stage, shielding Bismarck from flash flooding, strong winds, large hail, blizzard conditions and even tornadoes.

The Bismarck Bubble phenomena caught on the Flickertail Times Flickdar Weather Radar.Most recently, the bubble has lead to a severe drought in Bismarck, causing high water bills in some neighborhoods including the upscale northern neighborhood of Promontory Point.

“My mortgage is $9,500 a month, but my water bill is $16,000 a month,” says Larry Grassman. “Our neighborhood association laws in Promontory state we must keep our lawns green all the time so what choice do I have? Personally, I don’t see why the peasants in south Bismarck shouldn’t foot some of our bill.”

Bismarck Steve Bakken says the unusually high water bills are of little concern at the moment.

“I understand everyone’s water frustrations, but we have bigger challenges to solve in 2020,” says Bakken. “Our country is nearly torn in half and chaos is erupting everywhere, including right here in Bismarck. That’s why I’ve devoted all of my time to ensure all men, women, and children are treated just as fairly and equally as our neighbors in Lincoln and Mandan by urging our city commission to abolish our local firework ordinances.”

While the bubble has held strong in Bismarck, it could face its first real test of 2020. The National Weather Service issued a tornado watch Sunday afternoon in Morton and Burleigh Counties.

“The atmosphere is incredibly unstable and Bismarck could observe some severe weather as a result,” says the National Weather Service. “While we fully expect the bubble to hold, but given we could use a break, we are burning botched forecasts as sacrifices to the bubble. Hopefully, the bubble gives in a little, and thankfully, there’s no shortage of botched forecasts to burn in Bismarck.”

Those wishing to make a sacrifice to the Bismarck Bubble are urged to bring copies of botched forecasts to the National Weather Service’s office in Bismarck.

BISMARCK — Members of the Bismarck School Board dug their own graves today in yet another sign of submission to COVID-19. Members of the school board said the...

Burleigh County Commission Votes 3-2 To Proceed Into 2020, Rep. Becker Struck Down By God

BISMARCK — The Burleigh County Commission Narrowly Voted 3-2 Monday evening to proceed into 2020, reversing its course from 1920, after voting to allow 25 refugees into the...