by Teddy Meadowlark
in Outdoors & Sports
14 1
0

Philadelphia — The Philadelphia Eagles announced Sunday night that Mandalorian Star IG-11 has been acquired, serving as the team’s new quarterback.

The announcement was made following the Eagle’s disappointing post-season loss to the Seahawks.

Early in the first quarter, Eagles Quarterback Carson Wentz suffered an apparent head injury at the hands of Seahawk Defensive End Jadeveon Clowney, sidelining Wentz for the remainder of the game and quickly ending his post-season debut with the Eagles. 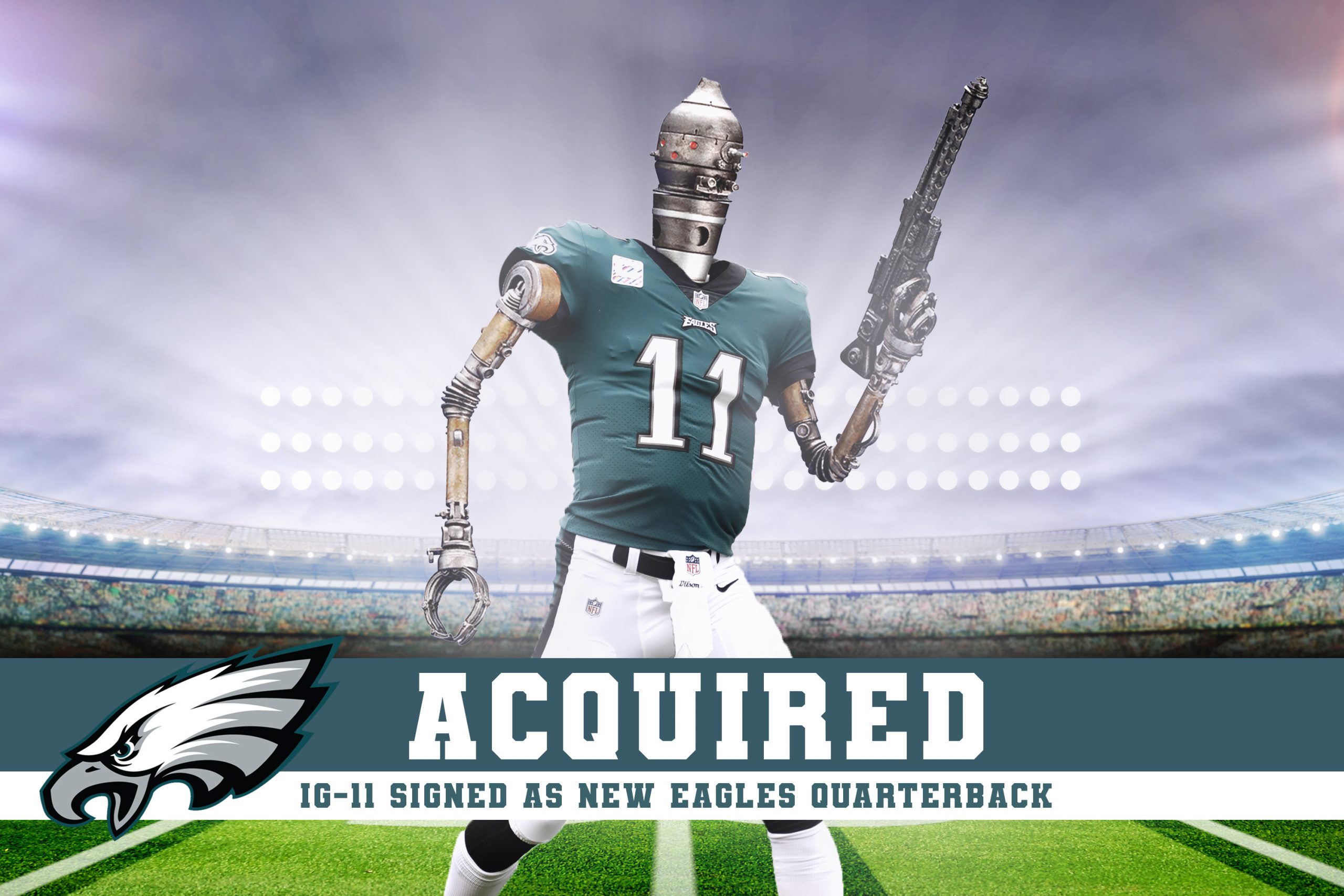 The Eagles announced late Sunday night that IG-11 has been signed on as the team’s newest quarterback.”The Eagles are happy to welcome IG-11 as our team’s new quarterback,” said the Eagles in a written statement. “IG-11 is as durable as they come. No other player could take a bullet to the head one week, implode the next, and miraculously rise from the dead and make a late season comeback like IG-11. The droid’s quick reflexes, perfect execution, and deadly accuracy will be a welcome addition to the fabled Eagles story. We hope the city of Philadelphia, our fans, coaching staff, and players will welcome him with open arms — because if they don’t, IG-11 will most likely thermal detonate their sorry asses.”

Losing Wentz in the first few minutes of his playoff debut was a devastating blow to Philadelphia. Wentz’s latest injury is causing some fans to question if the North Dakota native is cursed due to his long list of injuries in his relatively short NFL career.

Sources say IG-11 was spotted in the Eagle’s medical bay, joined by medical staff and Baby Yoda, tending to Wentz’s latest injury during the playoff game against the Seahawks.

While there’s no word on the severity of head Wentz’s injury or if/when he’ll return, the Mandalorian star will certainly be a player to watch in the 2020-2021 NFL season.

“We know singing IG-11 is a risk given his past history of self-destructing,” said Eagles Head Coach Doug Pederson. “Still, he’s less of a risk to us than Carson is at this moment.”

The Eagles should be a strong contender next season. Rumors inside the Eagles locker room say IG-11 can make 100-million calculations a second and has already been programmed with a memory bank containing every NFL play in history, excluding several Minnesota Vikings seasons.

BEULAH BAY — As thousands of North Dakotans quarantine during the state's COVID-19 crisis, the majestic humpback whales have returned to the bays of Lake Sakakawea. The majestic...