by Teddy Meadowlark
in News

NORTH DAKOTA — Parts of North Dakota were blanketed with snow over the Thanksgiving weekend, forcing the National Weather Service to issue no travel advisories. The advisories immediately prompted North Dakotans to make unnecessary travel plans causing dozens of accidents and stranding motorists throughout the state.

“It’s not that bad outside,” said area man Jack Nife as he waited for a towing service to pull his pickup out of a ditch on I-94. “As soon as the National Weather Service issued their no travel advisories, that was my cue to to hit the road. People just don’t know how to drive in this weather.”

The North Dakota Department of Transportation says that an unusual phenomena often occurs shortly after no travel advisories are issued.

“As soon as the no travel advisories are issued, folks seem to jump in their vehicles to judge for themselves how bad the weather really is,” says North Dakota DOT Director of Impaired Judgement Anita Driver. “Most of the time they’ve got no particular place to go either. They just drive in circles around town complaining that it’s not that bad before they ram into a street pole, crash into a mailbox, or cause a fender bender. And nothing seems to prompt North Dakotans to shop more than a no travel advisory.”

However not all North Dakotans agree with the ND DOT’s assessment.

“Seems to me there’s no better time to stock up on toothpaste and popsicle sticks than right now,” says Amanda Stokup. “The no travel advisory is just confirmation of that fact.”

The North Dakota Department of Transportation says they’re working on a a new marketing campaign to remind drivers of the risks of driving in hazardous conditions. 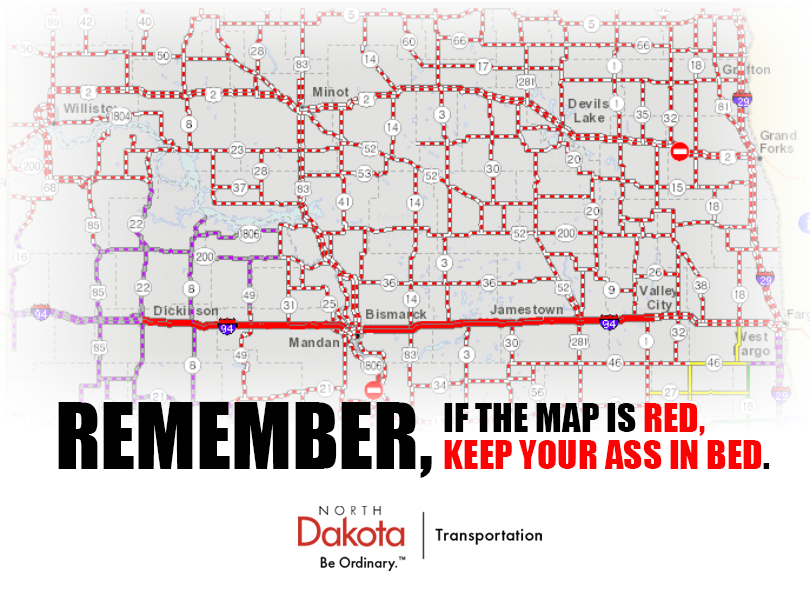 “We’re not exactly sure if folks are colorblind, can’t read, or just fail to understand that when we say the roads are bad, they’re bad,” says Driver. “So our new marketing campaign, ‘If the map is red, keep your ass in bed’ will hopefully clear up any confusion for motorists. If this doesn’t work, we may just to start shooting at folks until they get the message.”