No Result
View All Result
SUPPORT US ON PATREON

by Teddy Meadowlark
in Government & Politics

Grand Forks, N.D. – Weaved throughout history are the stories of bitter rivalries, feuds, wars, and foes; the Greeks versus the Persians, Sparta versus Athens, the Axis versus the Allies, the Hatfields versus the McCoys, and now North Dakota can add two of its own to the list: Blum vs Sheriff Bear.

In the past several weeks, a war of words has erupted via Twitter between Medora’s beloved Sheriff Bear and Grand Forks Representative Jake Blum.

Many know Sheriff Bear from his regular appearances at the Medora Musical, who has entertained audiences far and wide in the middle of the scenic badlands.

“Sheriff Bear has captured the hearts of children and adults alike throughout the Medora Musical’s fabled existence,” says the Executive Director of Celebrity Bear Management. “Never in our history of representing famous bears, which include Yogi Bear, the Bearenstain Bears, Winnie the Pooh, Smokey the Bear or Padington, have we witnessed such hostility aimed at such a beloved, wholesome bear. Sherriff Bear has kept Medora safe for decades and reminds us all to be better people by being kind to one another, respecting the environment, fighting for justice, and when in doubt, give a warm hug. Anyone who would try to wage a war with him is clearly out of their mind.”

“@RealJakeBlum Grand Forks Bear was murdered in your district, and your silence is deafening. We will not forget,” tweeted Sheriff Bear on his Twitter account. 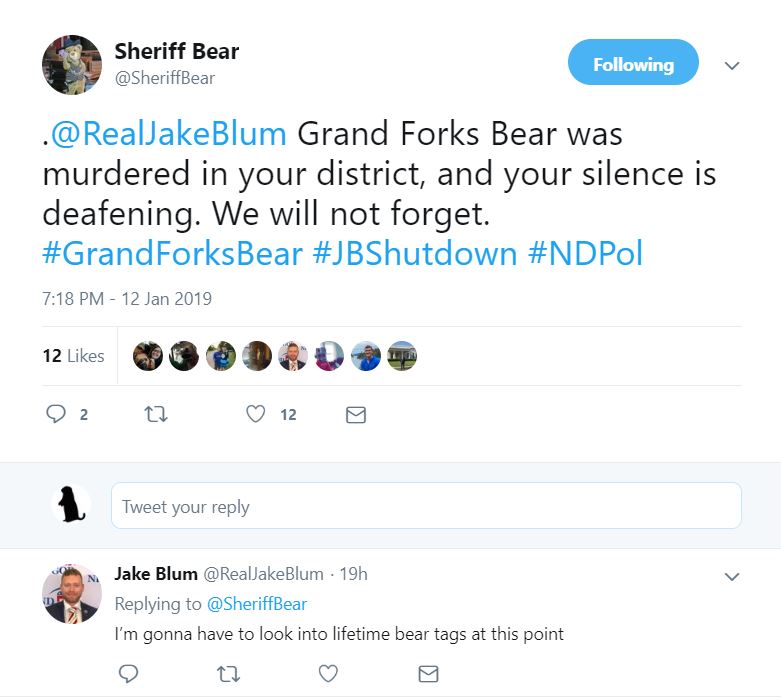 The incident Sheriff Bear referenced took place in July of 2018 when a black bear wandered into Grand Forks. The bear captured the public’s attention as it roamed residential neighborhoods and later climbed a tree in University Park where it was later tranquilized. Due to concern for public safety, the bear was euthanized by the North Dakota State Game and Fish Department.

“The incident clearly shook Sheriff Bear to the core. We had to give him a few weeks off from performing in the musical to grieve,” says a former Medora Musical cast member. “It impacted all of us. We’re a family here and when one of us grieves, we all do.”

After the death of Grand Forks Bear, Sheriff Bear continued to perform and entertain audiences. But later, upon learning that Grand Forks Representative Jake Blum had introduced legislation to increase North Dakota’s speed limit to 80 mph on interstates, Sheriff Bear took a stand.

“Sheriff Bear has many concerns with how this bill would effect the public safety of our citizens,” Tweeted Sheriff Bear. 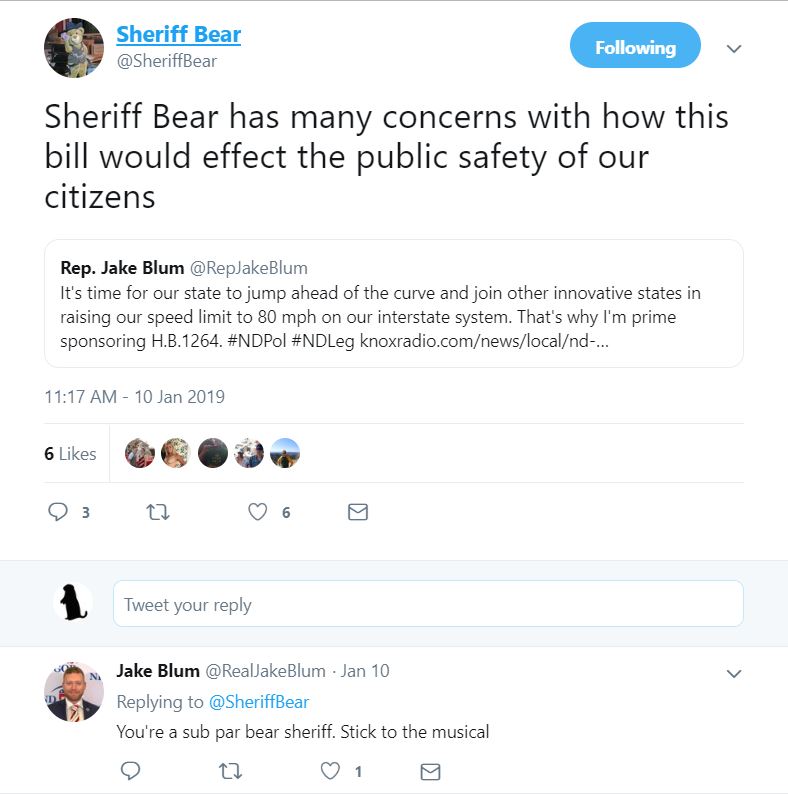 Sheriff Bear and Representative Jake Blum have continued their Twitter war, with Blum threatening to apply for a lifetime bear tag. Blum’s threat has prompted Medora officials to seek funding for additional security during the 2019 musical and have effectively banned Blum from Medora until further notice.

“We will not tolerate threats to any member of our cast, including Sheriff Bear,” says the Badlands Terrorism Prevention Director. “Until we can get this Blum vs Bear situation figured out, it’s best if Jake stays out of Medora for a while.”

Meanwhile at the State Capitol, security officials are scrambling to ensure protocols are in place to keep the peace.

“We have seen the Tweets and are putting additional security measures in place at the Capitol to ensure everyone, including legislators, are safe from potential bear attacks,” said North Dakota Highway Patrol Director of Wildlife.

The rift between Rep. Blum and Sheriff Bear has some legislators fearful that the feud could spark a civil war in North Dakota. Members of the Republican Party met in secret earlier this week to discuss plans to diffuse the bitter rivalry between Blum and Sheriff Bear.

“This feud has essentially turned into east versus west in North Dakota,” said one GOP Leader on condition of anonymity. “We’ve got folks in Grand Forks and even Fargo siding with Blum and we’ve got the entire western part of the state siding with Sheriff Bear. If this thing doesn’t get under control, you can bet that animal rights activists, environmental terrorists, or even PETA will show up and cause all sorts of problems for us. We’re trying to come up with a fast solution to deescalate their war of words before this powder keg explodes. Folks are already taking up arms and we may have no choice but to pass HB 1537, which would grant us the power to confiscate firearms from people involved in this conflict.”

Secretary of State Al Jaegar says his office is working on a plan for a possible diplomatic peace mission for the “greater good” of North Dakota.

“It breaks my heart to see Sheriff Bear and Rep. Blum fighting like this. The details are still fluid, but we’re in the early stages of planning a peace summit at the International Peace Gardens for Sheriff Bear and Representative Blum to put aside their differences,” said Secretary of State Al Jaeger.

It’s unclear exactly how Sheriff Bear and Blum’s bitter feud will unfold, but if the two’s back and forth Tweets are any indication, it isn’t going to end pretty. Already, supporters are tweeting their support for Blum and Bear, with #teamblum and #teambear trending on social media.

As a friendly reminder, the Flickertail Times is a satirical humor blog featuring all things North Dakota. Feedback? We’d love to hear it. Send it all to: editor@flickertailtimes.com