Minot, N.D. — Shock waves were felt across the famed Norsk Hostfest event this week after Miss Norsk Hostfest was stripped of her title after a DNA test revealed she was not of Norweigan heritage.

The Norsk Hostfest, hosted in Minot, N.D., is the largest Scandinavian festival held in the United States. Each year thousands of Norwegians and North Dakotans convene to strengthen their relations by crowning a new Miss Norsk Hostfest.

Norsk Hostfest pageant officials announced at a stunning press conference that Miss Norsk Hostfest failed a 23andMe DNA test. The test revealed the beauty queen was actually of German descent, not Norwegian, thus disqualifying her from the coveted title. It is unclear how the disgraced pageant contestant passed her preliminary Hostfest background screenings, however officials could not rule out the beauty queen was involved in a underground Lutefisk doping ring. Following the stunning revelation of her heritage, Miss Norsk Hostfest was promptly escorted from the North Dakota State Fairgrounds. 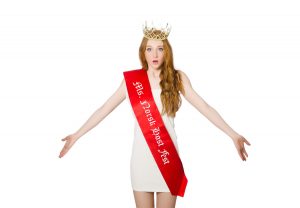 “We’re in crisis mode,” said the UN official on condition of anonymity. “We don’t fully understand what the short or long term repercussions of this scandal mean. Norway could easily make it more expensive for us to access Norwegian goods and services such as fish, sweaters, and lefsa. Worst case scenario we’re looking at all-out war. You can tell the kids any chance of a Frozen sequel just went out the window.”

Festival attendees were shocked when news spread of the beauty contest scandal. Ole and Lena Olsen of Saskatoon say they’ve never seen anything quite like the Miss Hostfest scandal in their years of attending the Scandinavian festival.

“Nothing compares to this, nothing,” says the Olsens. “We’ve been driving down from Saskatoon since the late 80’s and we’ve never seen anything like this happen. About the only scandal we can remember in recent memory is back in ’93 when someone stole Myron Floren’s accordion.”

Hostfest Director of Ethnic Heritage Lars Andersen says the scandal could impact the Hostfest for years and spell economic doom for the city of Minot.

“As word of the scandal spread, Alabama quickly canceled their act due to an illness and we’re pretty sure the Miss Hostfest scandal probably made them sick to their stomachs,” said Andersen.”That said, we’ve already heard from the Oakridge Boys that they won’t be returning to next year’s event. Williams and Ree wont return our calls and it looks like the Beach Boys suddenly booked themselves up for the next five years. Even Minot native Josh Duhamel switched his hometown to Fargo on his Facebook profile so it’s not looking good. At this point, we’re just asking folks to pray.”

City officials in Minot announced a Hostfest prayer-vigil was being organized by the Sons of Norway. Stay tuned to the Flickertail Times for more details on this developing story.

*The Flickertail Times is a satirical humor blog focusing on all things North Dakotan. Feedback? We’d love to hear it! Send us anything and everything to: editor@flickertailtimes.com.