Space Force is a new branch of the military, created by President Trump, to conduct space warfare and defend the universe against foreign invaders.

“There’s never been a bigger bunch of space cadets than Doug, John, Rick, and Kevin,” said Trump in the official statement. “Their minds and imaginations, which often stretch beyond the realm of earthly possibility and logical reasoning, lead me to believe they were the most qualified crew to lead nation’s first Space Force Flight.” 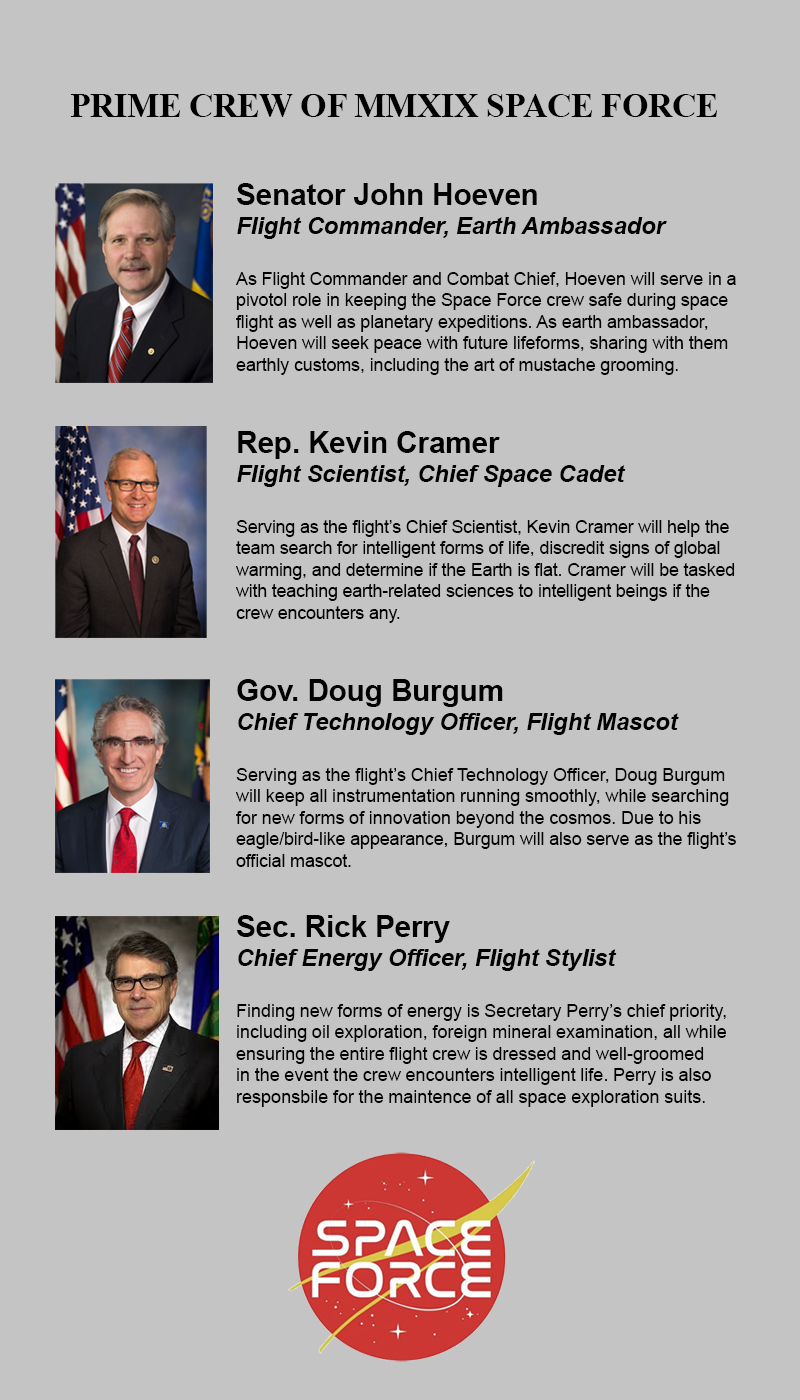 Burgum, Hoeven, Cramer, and Perry are preparing for their first journey into space at the Space Force Intergalactic Training Facility in Houston, TX. Their rigorous testing includes simulating exploration on lunar surfaces, space flight, and space combat. They are also brushing up on their space knowledge through an extensive review of science-inspired films including Independence Day, Armageddon, Close Encounters of the Third Kind, E.T., and Star Wars.

Space Force officials tell the Flickertail Times that although the crew will be subjected to many challenges, no IQ tests were required of the team.

“Given these four jumped at the opportunity to climb aboard a new vessel with no prior experience in space exploration, or anything truly related to science in general, we felt no IQ test was necessary for the team,” said a Space Force Official.

Space Force officials have yet to confirm how long the flight crew will be in space, however, the launch has been scheduled in 2019, after midterm elections. However, a recent job posting in the Houston Chronicle for Space Force is advertising a “senior flight crew personal shopper” position.

The position asks applicants to be familiar with Lee Jeans, Chaps Shirts,  Just for Men Hair Dye, and Free-Dried Walleye. Experience with Microsoft Zune Players, Windows Vista and Fox News Podcasts is a plus, according to the classified ad. 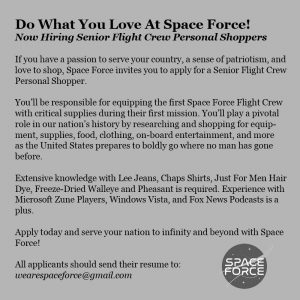 “Well obviously I was excited when the President called and asked if I’d take the job,” says Cramer. “It’s definitely going to be a once-in-a-lifetime experience for me, and my flight will also allow me to fully investigate quite a few of my constituent’s concerns that Earth is flat, so I look forward to finding out the truth for myself.”

Governor Burgum’s office was buzzing Wednesday afternoon after the official White House announcement was made.

“It’s an honor and a privileged to be a part of this incredible crew,” said Governor Burgum. “And I’m honored that I was asked to be the official mascot of the mission. The eagle has long been used by NASA in the past as a symbol of courage and freedom, and was also used as the nickname of Apollo 11’s lunar module. So it make sense that I will serve as the team’s mascot, given my eagle/bird-like appearance.”

North Dakota officials stated late Wednesday they are already planning for an official Space Force parade in Bismarck prior to the launch of the first mission.

“It’ll be a big draw,” said one North Dakota Tourism official. “We’re expecting folks from across the globe to show up for the official parade. Going forward, I don’t know how we’ll be able to justify our continued use of Josh Duhamel on tourism branding, given our new hometown space cadet’s worldwide fame.”

More on this story as it develops. Read President Trump’s official Space Force announcement below:

Burleigh County Commission Votes 3-2 To Proceed Into 2020, Rep. Becker Struck Down By God