by Teddy Meadowlark
in News

Minnesota officials stated at a press conference that the NDSU Duck Duck Goose team stayed overnight in Minneapolis as they traveled to the NCAA Duck Duck Tournament. Authorities apprehended the team after several residents reported the NDSU team failed to adhere to Minnesota Duck Duck Grey Duck rules while the team practiced for the tournament in their their hotel.

“North Dakota never has and never will negotiate with grey ducks,” said ND Secretary of State Al Jaegar. “Further, we are prepared to take aggressive steps against Minnesota for their blatant Duck Duck Goose violations. We have expelled 15 Duck Duck Grey Duck diplomats from North Dakota and are examining additional sanctions and measures to impose, including but not limited to the use of military force. Minnesota should carefully consider their future actions and the consequences thereof and we urge them to release our Duck Duck Goose team members.”

In response to Jaegar’s remarks, Minnesota Governor Mark Dayton announced via Twitter a complete ban on the sale of all Minnesota Vikings, Twins, and Wild merchandise and tickets to North Dakota residents, forcing thousands to cancel summer vacation plans. 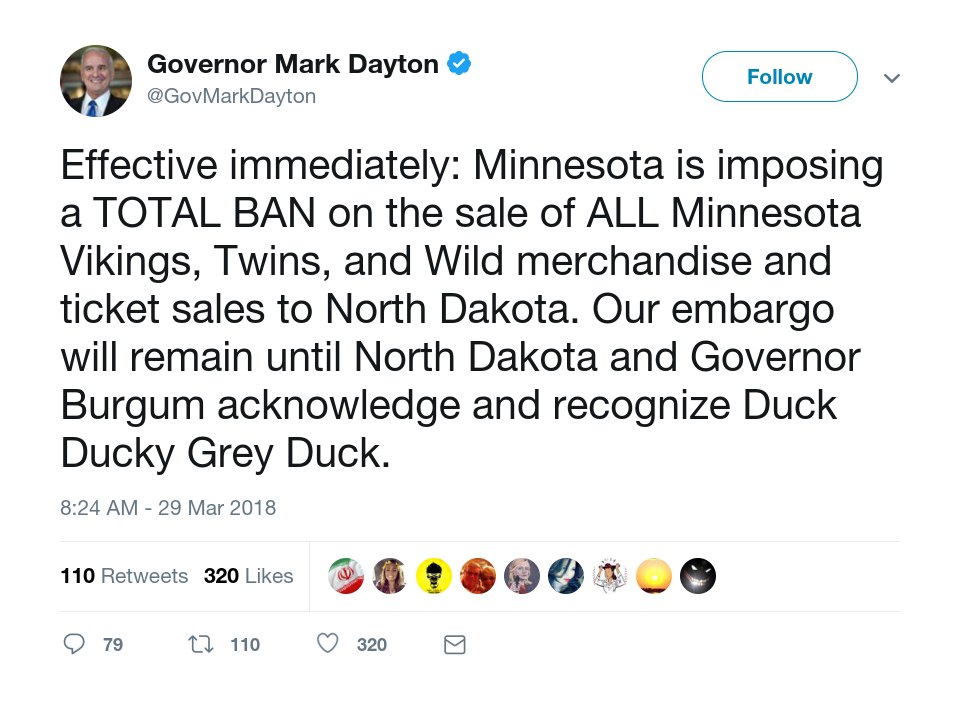 Governor Dayton’s embargo of all merchandise was announced the same day of the Major League Baseball opener sparking confusion and outrage.

“In my 68 years in Fargo, never have I seen witnessed such tension,” says Bud Gadwall of Fargo. “Are we going to war? Are we not? I don’t know. I’ve got family living just across the Red River and I’m scared I may never see them again. And yet I’m so angry over this entire situation including the Minnesota Governor’s actions. I don’t know if I can handle anymore disappointment from Minnesota. I may just trade in my Vikings jersey for a Packers one.”

Minnesota residents, however, seemed less worried about a conflict with North Dakota.

“So what if we go to war. It’ll be over in a day,” says St. Paul Mayor Chris Coleman. “Maybe after this whole thing is over, people will realize they shouldn’t mess with Minnesota and our grey ducks. In my opinion, we’re the only ones in this country that get the duck duck game right. Pay attention America, you’re getting a free lesson from Minnesota.”

Vice President Mike Pence visited Fargo, just a few miles near the ND/MN border, in an attempt to thaw tensions between the two states.

“Obviously the situation here is dire and we implore everyone to exhaust every diplomatic resource to bring a peaceful end to this rapidly developing conflict,” said Vice President Pence. “The President is aware of the conflict and shares everyone’s concerns. Our thoughts and prayers are with everyone in North Dakota and Minnesota.”

As fears of armed conflict continue to escalate, North Dakota Senator John Hoeven traveled to the Minot Air Force Base. Hoeven was spotted inspecting military equipment and brushed up on his rifle skills at a new firing range.

“Senator Hoeven is prepared to lead North Dakota in battle if needed,” said a spokesperson. “The Senator was able to sharpen his rifle skills while visiting the Minot Air Force Base and visit with the troops. He is not about to give in to this grey duck nonsense anytime soon.”

Senator Heidi Heitkamp offered remarks to reporters in Washington regarding the conflict.

“The days of North Dakota ‘Nice’ are over,” said Heitkamp. “Even if we reach some sort of agreement with Minnesota, we’re examining building a permanent border wall to keep the grey ducks out of North Dakota. And you can bet Minnesota is going to pay for it.”

Military sources tell the Flickertail Times that both the Minot Air Force Base and Grand Forks Air Force Base are on alert. Several B-52 Bombers were spotted flying near the North Dakota/Minnesota border. 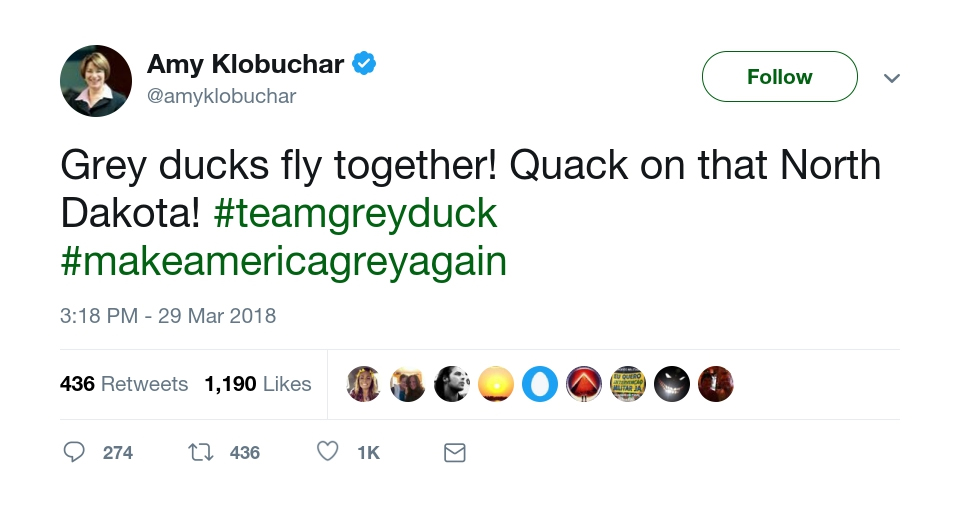 “The situation is grim,” said a senior Duck Duck Goose adviser to Governor Burgum. “Minnesota has over 10,000 lakes. That’s a lot of grey ducks to contend with and obviously we don’t want anyone to get hurt over this matter. But until the NDSU Duck Duck Goose Team is freed, we don’t have a lot of options left. The Governor has proposed a potential Duck Duck Goose/Grey Duck tournament between himself and Governor Dayton but so far nobody seems willing to compromise on the rules. That’s understandable given Governor Burgum was raised in Arthur, ND, where everyone played by the Duck Duck Goose rules.”

“Citizens of both states should prepare for the worst,” said North Dakota Duck Duck Goose Adjutant General William Mallard. “The National Guard is on standby and we’ve issued a travel warning advising everyone to postpone visits to Minnesota. War could break out at any minute and with Governor Dayton’s embargo of all Twins merchandise and tickets on the same day as the baseball opener, North Dakota is ready and willing to put up a fight.”

Sources tell the Flickertail Times that Governor Burgum is not happy with the Secretary of State over the recently failed negotiations in South Dakota.

“It didn’t help that Secretary Jaegar ate the ‘Chippers’ intended as a peace offering for Governor Dayton during the South Dakota Peace Summit,” says one member of Burgum’s staff on condition of anonymity. “We’d probably be in a different phase of negotiations had that not happened.”

“This is just another example of why North Dakota needs new leadership in the Secretary of State’s office,” says Boschee. “Doing things ‘the way they’ve always been done’ is not good enough. And now we stand on the brink of war because North Dakota has failed to recognize those who identify with the Duck Duck Grey Duck community.” 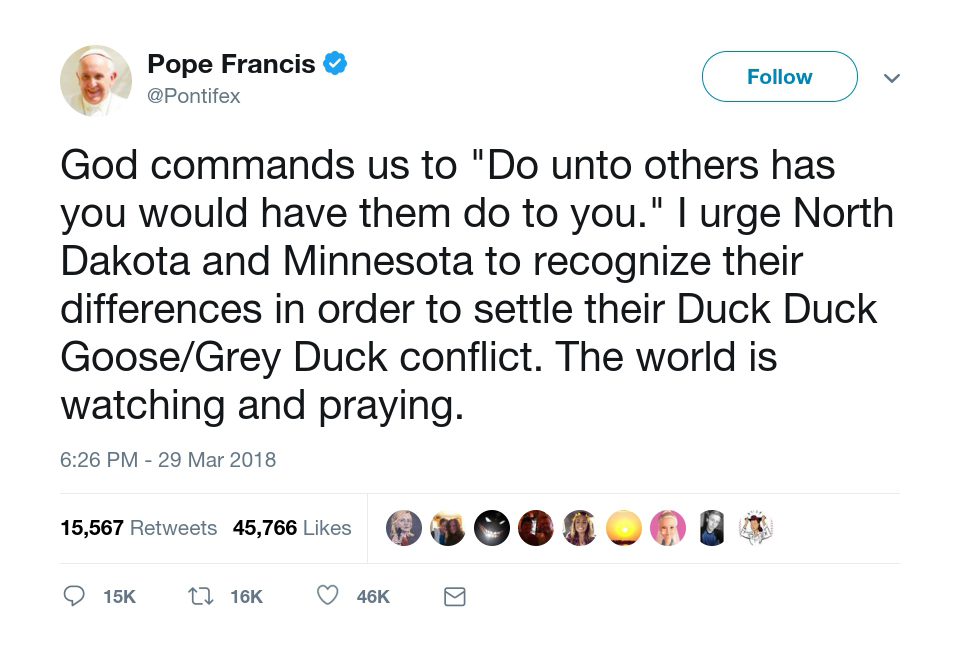 As a result of mounting tensions, authorities tell the Flickertail Times additional security precautions may be enforced until the conflict is resolved including closing the North Dakota/Minnesota border.

Stay tuned to the Flickertail Times as this story develops.

The Flickertail Times is a sattirical news blog featuring all things North Dakota. Feedback? We’d love to hear it. Send it all to: editor@flickertailtimes.com